Well, Tony Abbott (or the Mad Monk, as he's sometimes referred in Australia, with no affection whatsoever!) is at it again, sticking his nose in where it's not wanted and he doesn't fully understand. This time, he's weighed in on stem cell research. 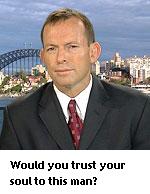 I'll admit that Mark Latham was wrong about many things, but he got it right when he said of Abbott, "The man is forty five years old and still hasn't worked out if he's a politician or a priest." There's precious few issues that Abbott won't put his theological spin on - not even research into potential cures for life threatening diseases and paralysing injuries.

With parliament due to have a conscience vote this week on stem cell research, Abbott has popped up in the media, saying allowing stem cell research is a "slippery slope" to human cloning, that is relates to the destruction of human life, and that in any case, there's no evidence that stem cell research provides any benefits. Abbott worries that it's just "raising false hope" for disease sufferrers. He wants a full and immediate ban on the research.

Well, let's just say that Tony's right about this. By that logic, all medical research should be halted so it doesn't raise false hopes (and this would have the added benefit of allowing the Lucas Heights nuclear reactor to be shut - those cancer patients won't need radiotherapy anymore).

Then we'd also need to ban IVF, as often embryos are destroyed at the completion of treatment. This would also make Abbott happy, not least becasuse of all the tax dollars saved by no longer subsidising the program.

And finally, there should be a full and total ban, making it illegal to be Tony Abbott. I'm sure that would make a lot of people whose loved ones are sufferring from currently-incurable diseases feel much better.