When it comes to climate change, we all (as individuals, groups, corporations and governments) have one of four options:

It will come as no suprise to regular readers that my old friend Piers Akerman is a climate change denier. So are Ann Coulter, Andrew Bolt, Rush Limbaugh and of course Alan Jones.

I think we can see a pattern forming here. These people are always clamouring for honesty. So why don't they just come right out and admit that they really don't care about the state of the planet, and if future generations are bequeathed an Earth which is an unihabitable, smoking ruin, it's their own damn fault for not being born in more verdant times? (These people do rather cling to the notion that everyone's circumstances are their own responsibility no matter what).

There is one Friday folly today, which speaks for itself: 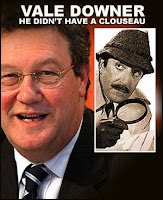 "Empire ends for Alexander the not-so-great
Farewell to the Clouseau of foreign ministers: pompous, slightly ridiculous and self-important."

And this on the front page of one of Australia's leading broadsheet papers. (Click on the picture to read the story).