In Praise of St Erma 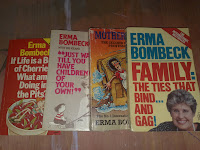 Today I tracked down two Erma Bombeck books I'd not read before in a Newtown bookshop, and my squeals of delight were such that DF insisited on purchasing both for me.

I've read and enjoyed Bombeck before, but read her work with a special poignancy now I'm about to be married and start a family myself. It's a different era now. Ms Bombeck was born the year after my grandmothers, her children are the same age as my parents, so how come so much of what she writes hits home to this feminist in 2009? Bombeck has been attacked by feminists before. A supporter said "Did these women think, come the revolution, that husbands would stop watching football, or that socks would stop getting lost in the machine?"

It's Ms Bombeck's - Erma's (I want to call her that, she feels like a friend) - ability to poke fun at all this that points to why she is still relevant. It can be hard to laugh sometimes. Around our place, DF pays the bills and I run the place. "Housework is a treadmill from futility to oblivion with stop-offs at tedium and counter-productivity." In our house it's mostly my treadmill. Not because I'm a woman and he's a man, but it's just the way things are.

Growing up, I'd hear of women despairing how little housework their husbands did and I thought "Not me, I'll marry a man who takes on things as an equal". But then...I left home very young, so I had years to get the empty-pizza-boxes and sink-full-of-cups urges out of my system before I realised I like a clean house. When DF came to join the Xander and Nico crew, he'd never really run a house before. He's a bit messy as well. Nothing too bad.

But his mind just doesn't work like that. The man is a health professional, with a degree and all, which is more than I have. He devises instant systems to solve any puzzle or game. He's a tremendous wit. But if I'm going out and he's following later, I have to remind him three or four times to lock the windows. It's dicey as to whether it gets done or not. He gets worried he won't do the laundry "right". It's not an excuse - he will do it, but asks me for a quick refresher on washing machine settings each time.

So yeah...it is easier, much of the time, to just do it myself. Should I complain? DF works full time so I can study what I love. He budgets, because I cannot face it. But sometimes it all gets a bit much, and I turn to St Erma for wisdom.

There's plenty to be found. Erma said it's okay to not be perfect. She said of motherhood: "I've always felt uncomfortable about the articles that eulogised me as a nurse, chauffer, cook, housekeeper, financier, counsellor, philosopher, mistress, teacher, and hostess. It seemed like I always read an article like this on the day when my kid was in the school play and I ironed only the leg of the pants that faced the audience, knitted all morning, napped all afternoon, bought a pizza for dinner and had a headache by 10:30." As I hang DF's shirts in the shower so the steam means I don't have to iron them, I laugh in recognition.

Yep, she was two generations removed and had some views I really don't agree with. So what? She also devoted herself to fighting for the Equal Rights Amendment. And none of it alters the warmth, love and humour of her writing. Please go enjoy some of her quotes. I'm off to cook dinner. DF can wash up - I'll talk him through it.