Nico Bell 21.2.10
The following things happened during our visit to Canberra:

It's hard not to think that this may be the best sight you'll see in Canberra... 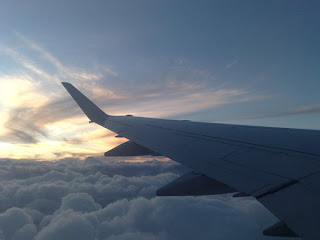 The diminishing sight of the place as you return to Sydney or Melbourne
I've heard normal people describe Canberra as boring, but as a political wonk who enjoys museums and galleries, I was prepared to quite like the place. Upon arrival though, I could see the validity of all the criticism...it's far flung (a cyclist's paradise, with bike racks on every bus, but an appalling nightmare in which to walk, with great whacking distances between everything), expensive, lacking in culture and lacking in decent bars. It's not just a question of it being a smaller place than Sydney. Newcastle is a small city too, but it has an organic feel; DH, not ever a Novocastrian by residence but a frequent visitor, points out you may turn a corner and find yourself at a row of terrace houses, or at a little local shopping area with a dsecent cafe and second hand bookshop, or even an interesting old abandoned warehouse. Canberra has none of that - it just feels sort of plonked. That's the problem with urban development strategies, even for established cities like Sydney. Urban renewal can seem the answer when an area is run down, but compare the Rocks with Darling Harbour. One was planned, the other wasn't. Cities need to evolve organically to be interesting, and that means taking the good with the bad.