The Joy of Gardening: Redux

Nico Bell 15.1.13
Last August I posted about my efforts to start a lasagna garden. At the time, it wasn't going so well, and I was on the verge of giving up. Where was my fluffy, light soil? Would I ever be able to grow veggies? The answer was unequivocally yes. A few weeks after I posted, the tediously-built layers  had broken down sufficiently to allow for planting. So I gathered up seeds and seedlings, and got started with the planting. I have rarely been so proud as when I was done:

Every day I rushed out to tend my veggie garden, and it came along nicely. I don't know if I could have achieved the same results from traditional gardening, but the lasagna garden just took off. After a few weeks I noticed the garden was full of the gardener's best friend - worms. I had created a healthy, live garden! There were a few hiccups, like when I wondered why the flourishing crop of oregano I'd grown from seeds had no fragrance, and I realised it was actually a weed:


Generally though, everything flourished. By around early December, the rocket was flowering and had to be thinned. I'd finally achieved what I'd always wanted - a kitchen garden, and we could add big handfuls of herbs to all our cooking and enjoy fresh leafy greens that hadn't come out of a bag. 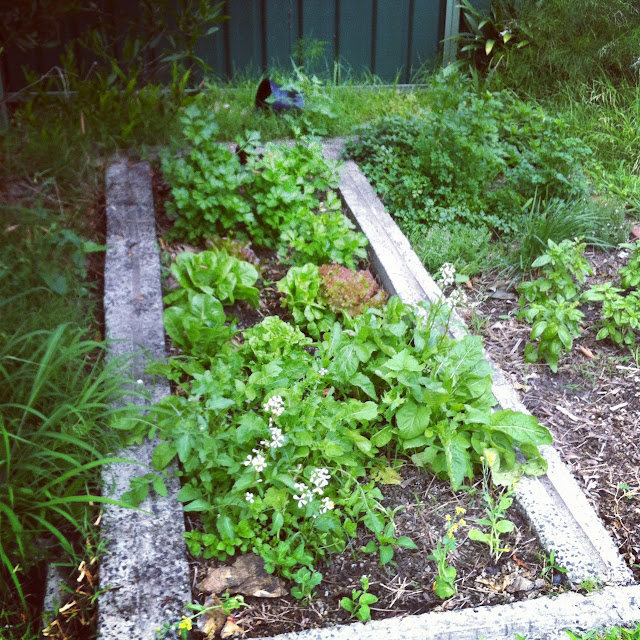 Then things started going nuts. Summer heat and my zealous watering produced plants that went feral. Basil leaves the size of playing cards. Lettuces that grew three foot tall and toppled over under their own weight. I think the bok choy reached sentience. Whilst all this was going on, I was finding my feet in my new job and watering aside, didn't spend much time on the garden. I knew it had all gotten out of hand when I realised there was a three foot tall tomato plant in there that had self-seeded from the compost. And I hadn't even noticed. The thing was fruiting! It was time to start again. I lopped, weeded, ripped up, trimmed and mulched. All ready for the autumn planting. I've got the bug. I've got it so bad in fact today I've started on a second lasagna garden. In fact, I'm having minor fantasies about throwing in corporate life and becoming an organic farmer. Now to convince DH...