Nico Bell 16.12.13
Ah, the poor old ABC. Seems like no matter what they do, people aren't happy. From the anguish of the left that Howard era hawk Peter Reith features so prominently on political panel show The Drum, to the eternal accusations that the national broadcaster has a leftist bias. Now they're in power, Rupert Murdoch and his cronies will stop at nothing to crush the ABC, culminating in the bizarre accusation this week by that frothing love child of Andrew Bolt and a particularly ravishing cane toad, Piers Akerman, that the harmless darling of preschool programming, Peppa Pig, pushes a weird feminist agenda.

Accusations that the ABC has a secret plot to indoctrinate kids with a socialist line are nothing new. We all know Jemima from Playschool is a lesbian - she wears overalls, after all -  and what about the Bananas in Pyjamas? Obviously an unemployed homosexual couple; they never get out of the pyjamas and go to work. And let's not even think about all the coming down the stairs.

Look, it's true that in Peppa Pig women have jobs. They even go to a recycling centre - run by a woman. And whilst right wingers may think that kind of thing makes Baby Jesus cry, it's not actually lefty indoctrination. Having a two year old, I see many, many hours of ABC 4 Kids, and none of it looks like lefty indoctrination to me. And I should know. Because I am trying to indoctrinate my child. 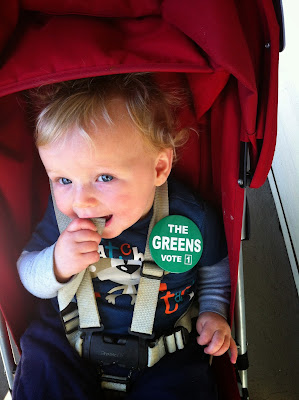 Baby G, at age two, has marched (or ridden in an ergo carrier) against coal loaders, to show support for climate action, against mandatory detention, for pay rises for community sector workers. He has listened to his parents explain, to someone queueing up to vote and grumbling what a waste of time it is, why voting is a right to be cherished. He has been to Greens party events. He has been refused permission to carry a Liberal party balloon and been dressed in a t shirt saying THIS IS WHAT A FEMINIST LOOKS LIKE. He has overheard hundreds of dinner table conversations about lefty issues. He's even met Bob Brown whilst still in utero (okay maybe that one doesn't count, but I will proudly tell him about it when he's old enough to know nevertheless). We will continue to explain to him why we believe locking up asylum seekers is wrong, and why same sex marriage should be legalised, and why the original inhabitants of this land should be recognised in the constitution, and that as a white male in a rich country he is in a privileged position, and he has a duty to help those less fortunate. And I suppose we have to brace for a possible adolescent rebellion where he joins an evangelical church and the Young Liberals, but I hope not. I hope he grows up with real values and an urge to take action to make the world a better place. And this is what imbuing a child with lefty values looks like. Not an animated rabbit who happens to be female, driving a truck.

If you disagree with raising a child this way, that's fine; I don't recommend it for your child. I suppose if you're a paranoid conservative, everything seems like left wing bias. But can I say to the right wing commetariat that I know what leftist indoctrination of a child looks like, because I'm doing so. And ABC children's programming isn't it.