Is There Life After Mine?

Nico Bell 10.8.14
With all the controversy flying this week after Senator Eric Abetz spruiked the thoroughly discredited line that abortion causes breast cancer, I threw this up on Twitter today: 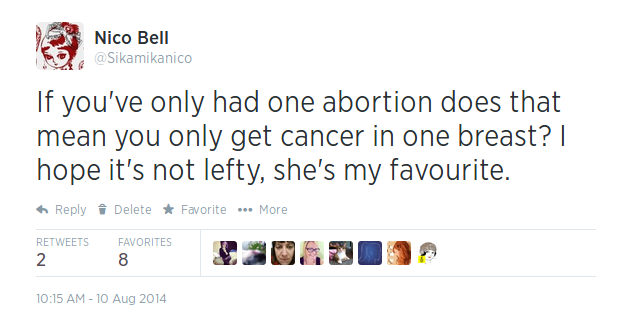 It got a few favourites, no one attacked me over it, the internet seemed entirely untroubled by the implied revelation I've had an abortion. I don't regret what I share, but it's not just me I have to think about anymore. The internet is forever, as the Melbourne University Young Liberals are the latest to find out. How will what I've shared online affect Baby G in the future?

I've recently locked my Instagram account for similar reasons; G is about to turn three, and is now more recognisably a person instead of Infanta Generica, and I don't want classmates or anyone other random person able to freely access pictures of him. But what happens in future if classmates - or their parents - stumble across my blog? Will parents be wary of sending their kids to play at "that strange woman's house"? Will there be judgement and bullying over the PTSD stuff, or what I've written about living on welfare, or simply for our political beliefs? Would - my heart breaks - G be teased in the playground over something a six year old has heard their parent say about me?