It's pretty irritating living next to the coal train line in the shadow of the world's largest coal port. The outside walls of our house are constantly covered in a later of coal dust. I have to wash the dust out of the laundry baskets every time we use them (and yes, we do regularly do laundry). I quit smoking over five years ago and don't have asthma, but I've a constant hacking cough that spurs strangers to tell me "those ciggies will kill you, you know", and endless chest infections.

So that's not much fun, but it's even to scarier to think what happens at the other end of the coal chain, such as the lethal air pollution in Beijing cause by burning Hunter coal. More dire, if possible, is the very real and immediate threat that Pacific Island nations could disappear entirely due to rising sea levels - destroyed by climate change caused by the very coal seen for so long as the lifeblood of the Hunter.

So a group of activists from the threatened nations known as the Pacific Climate Warriors have vowed "we are not drowning, we are fighting", and came to Newcastle to take on the world's biggest coal port and show the very human reality of what stands to be lost. In the face of our head-in-the-sand federal government and a Prime Minister who declared this week that coal is good for humanity, hundreds of locals showed up to lend solidarity and join the canoe blockade of the coal port. I decided to give the canoes a miss - didn't want to sink one of the darn things - but headed along to lend my voice. The day's events got underway with a Welcome to Country, then a prayer from a minister from the Pacific Islands, then the climate warriors performed a blessing of the canoes which was very moving and drew great applause (though one little man found it all too much and burst into tears because "the man was loud" - bless). 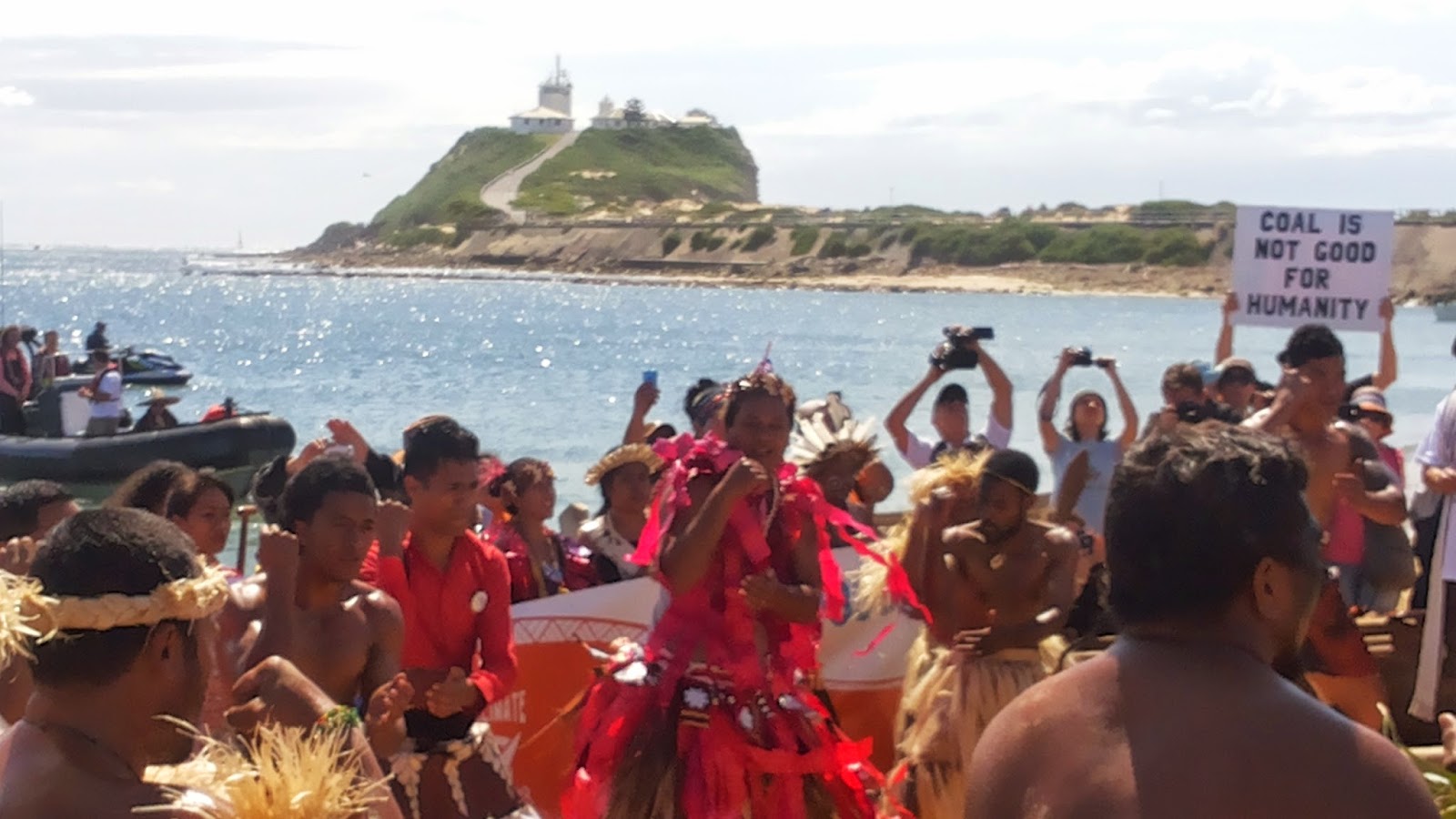 In a reflection of the reality of the situation, there was then advice on what to do if arrested for carrying out non violent civil disobedience , with many protesters writing the lawyers' numbers on their arms. The formalities over, the first canoes hit the water. Now, at this stage the police had kept a fair distance, but then word came through the first departing ship was due to come through, they took a more active role, with the rubber duckies and jet skis seeming to herd the protesters away from the approaching ship. As Luke Pearson, founder of Indigenous X (whom I got to meet!) said, we have the sight of the police protecting corporations from the public. It seemed fairly benign - the police were bringing canoes and protesters onto the rubber boats and bringing them to shore, but then letting them go - but it got me to thinking.

A frequent argument seen against this and other protests of its kind is that, whether or not you agree with what the coal industry is doing, they are carrying out a legal activity and should not be impeded. There's two issues here. First is the confusing of legality and morality - smacking is legal whilst medical marijuana isn't, and I'm firmly of the belief it should be the other way around; legality is not an indication of worth. But more crucially is that the law just isn't fair. I've seen commentators say the protesters should take legal means, such as petitions, to change laws they disagree with. But that's to ignore the enormous and inequitable influence vested interests have in society. The coal industry has enormous influence in Australia - especially in NSW, where we have Liberal governments at a state and federal level, so strongly entwined with the interests of the mining industry they deny the threat of climate change and seek to shut down the renewable energy sector. When the law is unfair, you can try to change it; when the mechanism behind the law is unfair, civil disobedience becomes the only option.

Not that I engaged in civil disobedience myself. I stupidly neglected to bring sunscreen, and despite knowing I needed to leave stayed put for nearly three hours, to which I have a terrible sunburn. So I missed that later in the day ships were unable to get through the blockade, and also apparent injuries to protesters at the hands of police (which police have denied). There's a real momentum here, and I look forward to participating in more actions in future.