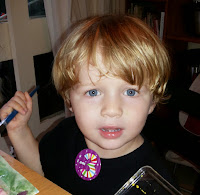 Baby G is three and a half. An only child. A little odd (can't think where he gets it).
This is some stuff he has said.