Newcastle off the Rails 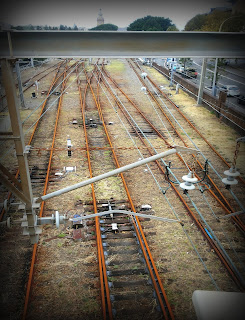 I've been at times a bit rough on my fellow Novocastrians (I will always consider myself one even though I don't live there right now). I've long stated Newcastle's city motto should be "getting all worked up over nothing". Goodness me, how they love to argue! Give them any issue - entry fees into swimming pools, say, or whether some trees should be removed - and they will fight to the death, on twitter and the comments section of the Newcastle Herald, with personal insults and accusations of bias, until you get the impression it's the argument that's the point here, not the issue at hand.

However, there is one area where Novocastrians could be justified in getting a little crazy, and that's the matter of public transport. To background: in December 2014, the heavy rail line that branched off the main Northern line into the centre of Newcastle's CBD was closed. The closure came after many years of debate, which people expressed weariness of; the problem is, the debate was never going to conclude with the result "okay, the line stays". The train line cut across very valuable, and beautiful, waterfront land (the beauty of Newcastle takes my breath away some tines) and powerful people wanted the heavy rail gone.

And so did I. What? Nico favours closing a rail line? Well, sort of. The idea was, in theory, that the heavy rail line would be replaced by light rail. The heavy rail, with its fences and overhead wiring, created an enormous physical barrier between the CBD and foreshore, so I was in favour of removing it if, and only if, the heavy rail was replaced by light rail along the same corridor, The light rail could travel more frequently, with more stops, and offer greater convenience whilst allowing people to easily walk across the line from the water to the shops.

It was never going to happen, The rail line should never have closed until construction of light rail was pretty much ready to get underway. Instead, it was closed without even a definite plan in place for the light rail - and nearly a year later, there still isn't one. We learn today that the government has been, for the last fifteen months (and prior to the closure of the heavy rail) sitting on a report stating the business case for the light rail is flawed, and it has failed 7 of the 9 criteria it has been assessed against. That's it. We have no viable plans, no agreed route, no construction schedule, no starting date.

Personally, I don't think the light rail was ever going to be built, and it certainly won't now. The government will quietly shelve the plans, or hold off until it completes privatising the public transport network (a plan they announced out of the blue never took to an election), then Veolia or Transdev or whoever else wins the contract will announce that they're terribly sorry, but the light  rail just isn't viable; it's sad but what can they do.

And we'll have more of the same as now, like the last time I was in Newcastle with a hot and bothered four year old and had to wait forty minutes for one of the "frequent" rail replacement buses, and we missed our connecting train at Hamilton and had to wait nearly an hour for the next one.

And the land will be sold to developers, because if there's one thing Newcastle desperately needs, it's more new apartments for downsizing baby boomers.

It may not be the worst thing the state government has done, certainly not with all the closing of shelters for victims of domestic violence and selling off public housing. But Newcastle gets screwed yet again, the wishes and votes of the community ignored, the needs of the population (including the new uni campus in town being constructed with no parking spaces to encourage the use of public transport that now no longer exists) disregarded.

Secession doesn't seem so crazy, and you can understand why people get so upset.

Note: I always miss out on NaNoWriMo and NaNoBlogMo cause of exams, so I'll be attempting to blog every day in December. Join us, won't you? #BlogDec