Facebook is not the Real World (there's Rainbows out there)

Nico Bell 16.9.17
Gah, the SSM plebiscite - or more specifically the debate over the plebiscite - is depressing and exhausting. It can be hard, when you look at the relentless string of comments on an article on say a major media outlet's Facebook page, saying that the whole Yes campaign on same sex marriage is a Marxist plot to brainwash children; that children brought up by same sex parents grow up depressed, obese and plagued by intractable ring around the collar; free speech is at risk; and, before the moderators can step in, if they do, vile slurs about same sex attracted people themselves.
And it can be tempting to see this as how people are thinking; to wander through the shops or catch a bus and wonder if your fellow citizens are harbouring such thoughts.
But they don't. Comments on Facebook do not represent the real world. In fact, the represent the loudest, angriest sliver of the people disconnected from the real world. In my totally unscientific research on this, there were local government elections here in NSW a couple of weeks ago. And in the City of Newcastle, the Liberal party were all but wiped out; Labor romped in, increasing their share of the vote, with the Greens putting in a decent performance as well. Most Novocastrians calmly elected their new, centre-left council and went on with their day.
But to look at the Facebook pages of two of the largest media organisations in Newcastle, you wouldn't know it. The comments on ABC Newcastle and The Newcastle Herald were furious. Almost every comment lamented the result as just awful, a coup, their fellow citizens must be idiots, the turnout must have been low, this can't be right...an overwhelming response then, from people commenting on Facebook, completely at odds with the reality.
And it's the same (I believe and hope) with marriage equality.
The people posting homophobic garbage on Facebook are a noisy, scared and horrid minority. They can be ignored. They should be ignored. I'm not saying their lies should be let stand; I like many people post rebuttals, the truth, when I see the worst "vote no" nonsense (including links to peer reviewed literature, or as one particularly egregious bigot referred to it, "leftist mumbo jumbo").
But we won't win them over. What we need to do is talk to the good and decent people around us, and above all - make sure people post their surveys. Get them in the mail. If they don't return them the day they fill them in, chances are they won't return them at all. Life takes over and things get lost. Get your paper back in the post box!
And if you are struggling, that's okay. This is a really shitty time in so many ways. Here are links to some support services.
And now this: 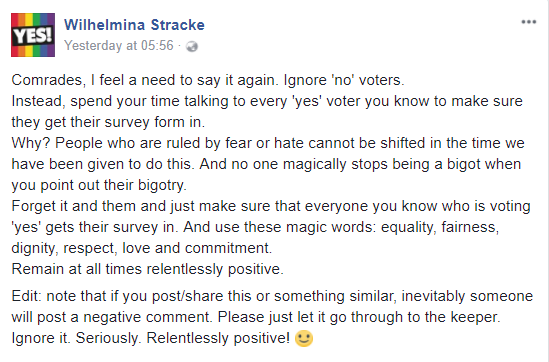