Nico Bell 29.9.17
As made headlines around the world, Hugh Hefner, founder of Playboy, died this week at the age of 91. Remembered for his publishing empire, some are also remembering the dude for empowering women and being a feminist - even one of the first feminists, a pioneer of the women's movement. 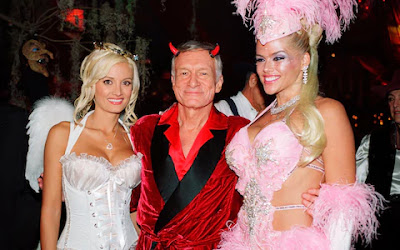 Gag me.
Hefner was a pioneer, all right. He pioneered Playboy Empowerment, supposedly the concept that a woman could do whatever she wants - which funnily enough, involved convincing her that what she wanted to do was exactly what men wanted her to do. From Feminist Current:

He was a crusader. A rebel. Just a humble man who wanted to fight the good fight against sexual repression, and liberate the American population from moral crusaders who said sex was a bad thing. Hefner insisted over and over that his goal, with Playboy magazine, was to convince America that sex was “normal” and to “bring sex to the mainstream.” But not only did he fail to do that, he never even tried.

Watching American Playboy, listening to Hef’s stories about himself, I realized that Hefner was in large part responsible for the lie that sexual objectification equals sex. He had no interest in normalizing actual sexuality, but wanted, rather, to normalize the male gaze and men’s perception of women as pretty things to be looked at. Playboy was never about “sex,” it was about male fantasies.
How convenient that what was now empowering for women was prancing around in a bustier with a cotton "tail" on your arse. Perhaps this was meant to advance the cause of feminism generally, in the rising tide lifts all boats way of thinking. Maybe little girls would watch the Victoria's Secret parade and know they could live out their own dreams of being an engineer or social worker. G strings first, then equal pay would naturally follow.

Brainwashing women to embrace their destiny as sex objects isn't empowerment, it's sublimation.

With my taste for terrible TV, years ago I watched some Girls Next Door. It sure looked like fun. It would come out much later how horrible life was for women living in the Playboy mansion. That's not sexy; it's not even sleazy. It's just plain grotty; even a form of imprisonment. (Don't get me started on those who try to justify R. Kelly).

None of it is empowering. And Hefner was no feminist. As Julie Bindel points out, Hefner in fact hated women:

I would imagine that silk pyjama manufacturers are mourning Hefner, but no feminist anywhere will shed a tear at his death. And the liberal leftists that wax lyrical about how Hefner was a supporter of anti-racist struggles should perhaps ask themselves how such a civil rights champion squared this with the millions he made from selling the most vile racism in much of his pornography.
Hefner was aware of how he was viewed in sections of the media and carefully crafted his image. He'd talk up the freedom he provided for women, and their accomplishments. But it was freedom only to sexually please him. The women in the Playboy mansion may have been worldly, educated, smart, but that's not why he wanted them. It certainly wouldn't get them in the magazine.

Playboy and its ilk only "empower" women to accept their natural role as sex objects. And that's worse than the puritanism Hefner claimed to be crusading against. Take your bunny ears and shove them. Sexualising women is not empowerment.