Nico Bell 31.12.17
I meant to end the year on a funny note. I mean, funny as in humorous, not funny peculiar or funny as in the kid in the choir finds his voice suddenly breaking, something a childhood spent watching The Brady Bunch led me to believe happened a lot more in real life than it actually does.
But last night I found out someone died, and it occurred to me that I've gotten used to the weird feeling when someone dies. It's definitely the worst thing that's happened for me this year.
Death has been kind of drifting around in the past year and a bit. My confirmation sponsor, a long time friend of the family, died of a sudden heart attack on holiday in New Zealand. That was horrible and sad, and I realise now that 59 is really fucking young to die, but it's...somehow you can place it in the course of life events. It's dreadful, but believable.
The others...I can't even begin to understand.
There was Cindy, who was in my year at school when I transferred to the local high school. It was a big year group - 250 students at the beginning of Year 9 - and we didn't mix in the same groups, although she was in my drama class and performed in the class play I cowrote, so I knew her slightly, not well, and she left school at the end of Year 10 (by the HSC I think we'd dwindled to a class of about 80).
Maybe five years after high school, I ran into her in a pub in Newcastle and she told me "Wow, you got beautiful". We had a brief but friendly, alcohol blurred chat, then I never saw her again.
When a class mate of posted on Facebook that someone had died, and upon asking who, he told me it was Cindy, I was very sad but can't say I was gasping in shock. I don't know what happened. Does it matter?
That classmate was Shayne. Shayne I knew a bit better; he stayed at school til the end of the HSC and we went to some of the same parties. He was genuinely friendly, and was the first person to ever notice my severe depression: "you just look so sad all the time".
But it was the Nineties. There was no Headspace or Beyond Blue, no helplines or forums. We got on with things. That was not a good thing. It is better now, that there is awareness and help.
He came out a bit later in life, and there was a boyfriend, and then there wasn't, and Shayne took his own life earlier this year.
Shayne had known Cindy, been pretty good friends with her I think. Did it touch something off? Were the seeds of a contagion in the air? I don't know. Maybe it had something to do with it, maybe not.
But that one, yes, was a fucking heartbreaking shock.
Then Brendon. We worked at the same office for a few years, a pretty small team. We didn't have much in common, and if this was a romcom we'd have fallen in hilarious, opposites-attract love, but as it is we just got on okay as workmates and that was it, then I left and lost touch.
But still, he was only my age I think, and died in an accident a few days ago, and that is just too young to die.

From years of reading the Newcastle Herald Memoriam and Celebration notices, I've long noticed that more people in Newcastle seem to die young, at least compared to the Sydney Morning Herald. And there's been people I've known before.

But these three deaths, of three people born in the late 1970s and early 1980s, and who should then have lived until the 2050s, at least...I can't wrap my head around it. The universe has been off  kilter for a while now, I think everyone gets that feeling. And this, for sure, is three kinds of wrong.

And soon it will be a new year, a year that leaves these people behind, as time goes on without them. The world is poorer for those we lose. In 2018 I'll try harder to hold on to the ones who are still here. 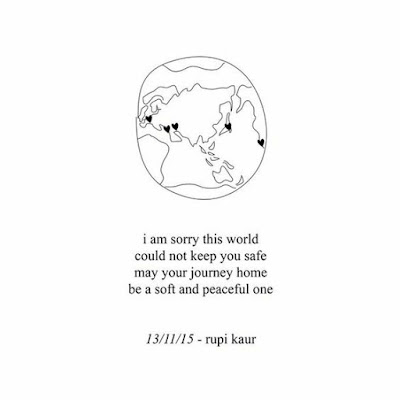