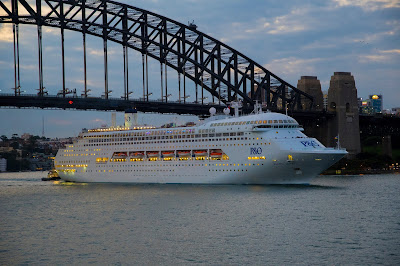 It's coming up to autumn in my corner of the world, and my friend Ridge* and I have been discussing going on a cruise. I know - I know! - I can't afford it. But I've been through kind of a shite time, what with all the custody stuff, and maybe if I save real hard... I know cruises aren't everyone's idea of fun - someone on Twitter described them as going on holiday at a Westfield mall - but I like the all inclusive aspect; you just get on the ship and switch off your brain for six days. My brain is always whirring to dark and uncomfortable places; it needs a rest. And above all, at less than $100 a day if you get a good deal, covering travel, food, accommodation, activities and sightseeing, they're cheap.

Anyway, it's fun to day dream, although slightly unsettling. Once you've been searching for cruises, the logarithms dreamed up by the boffins of the internet keep showing you stories about cruises, nearly all of them bad

Cruises have been in the news lately for all the wrong reasons. A ship was forced to return to Sydney last month after a brawl broke out after a toilet queue (I bet it was rice on the buffet. Everyone assumes it's the seafood, but did you know rice is actually the leading cause of food poisoning in Australia? See, read this blog, you learn something). That same week, another ship  returned to dock early and nine passengers removed after claims of repeated brawls and trouble allegedly started in a fight over a thong (the kind that goes on your foot, not your butt).

If you die on a cruise, you want a bunch of other people to die too. If you die with other people, then you're part of a tragedy. The Prime Minister will make a statement, flags with be lowered, you'll get your name on a memorial plaque. If you die on your own, then you'll forever be just the idiot who fell off a ship.


But genuinely terrible things can happen on cruises, and with issues over jurisdiction, justice can be hard to come by. There's an organisation called International Cruise Victims who are not, as one might first assume, a bunch of Baby Boomers complaining about the wine service, but the victims, families and friends of crimes on cruise ships - murders, sexual assault, disappearances. I spent some time reading around on the site; many of the stories are truly horrific.

And you'd think any or all of this would put me off, but no. I want to go on the damn cruise.

So there's the question of what kind of cruise to go on. Ridge and I want to avoid: families with small children; schoolies; the  elderly; Baby Boomers; bucks and hens tours...that doesn't actually leave very many people we would actually want to be stuck out at sea with for eight days. We discussed going on a gay cruise, but a gay cruise is not without its issues; whilst Studs n Suds night may be fun at night, it's not so much fun when it's ten am and you just want a cup of tea and you have to step over two guys fucking in the corridor.

Food, wine and comedy cruises sound like fun, but they only go out to sea for a few days and back again. We want to actually go somewhere, even if its just for a bit of wading and buying a t shirt that seems fun on Mai Tai island and looks ridiculous in Sydney Central Station. And a bit of sun would do me good. How does an Irish person end up with Vitamin D deficiency in Australia, cause I did (my iron stores are too high, though, if anyone's running a bit short). This is all right in the inner west, where every natural skin colour is considered all right, but is very odd when I go to the parts of Sydney where white people don't like brown people even though they spend all their spare time trying to get as brown as possible.

David Foster Wallace compared the cruise experience to being in the womb; a tranquil, pampered nothingness. I think my first time around was marred by osmotic resentment, so I'm keen to have another go. Who wouldn't want to be born again? Yep, a cruise is just what I need. I'm ready to float on warm, tranquil waters and emerge red, screaming and covered in goo, counting myself lucky to have survived.

* He picked his own pseudonym. So don't blame me.