Not a good look

Nico Bell 1.5.18
I felt annoyed, kinda disgusted and above all, tired when I saw this photo of NSW Greens MP Jeremy Buckingham at a Greens trivia fundraiser: 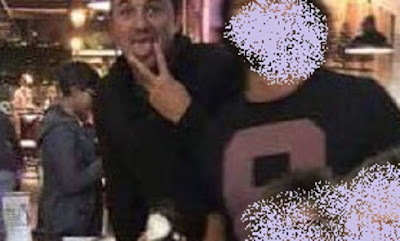 (I debated whether I should include the actual photo, but decided to because the post won't make much sense unless you've seen it and anyway, with all the stuff I've discussed over the years, this isn't exactly a safe space.)

I felt disgusted because it sure looks to me like he's making a lewd gesture that refers to cunnilingus. And that makes me tired. I'm sure it would make many other women feel tired as well, because we're so tired of the graphic abusive messages we receive online. Just recently, a man added me as a friend on Facebook. I don't normally accept friend requests from people I don't know or share any mutual friends with, but in this case, I'd seen him commenting on several political posts and he seemed okay, so I accepted this one. Well, he started with messages saying he wanted to meet me and when I demurred, it escalated to vile messages with graphic descriptions of sexual acts. And then again I felt annoyed, but also exhausted by the amount of misogyny women encounter online.

So I felt pretty revolted and disappointed by what Mr Buckingham appears to be doing in this photo, and it seems I wasn't alone. There was fairly lively discussion on a (public) Greens supporters Facebook page, with defenders of Mr Buckingham stating that he is simply making an "up yours" gesture at the losing trivia team - and that inner city types wouldn't understand. Now, I'm from Newcastle, and I've never seen anyone give an inverted v salute to indicate up yours. It is always the middle finger. I guess things are different in other, non-inner city parts of NSW.

But I always try to see the good in people. I know things can be misinterpreted and people make mistakes. I decided to reserve judgment until Jeremy Buckingham had a chance to respond to allegations he, as an NSW MP, is making graphic reference to a sex act in a photo - not a good look. This is the kind of thing I wanted to see:

I want to apologise for being photographed in what I now understand is an inappropriate and offensive pose. Whilst no offence was intended, I apologise unreservedly to anyone who was hurt or offended by this gesture. I understand we all have a part to play in eliminating sexual harassment and assault from society. The Greens are committed to providing a safe environment free of assault. Anyone who wishes to discuss this further is welcome to contact my office. A link to the Greens Sexual Harassment policy and resources for those needing assistance can be found here:
https://nsw.greens.org.au/nsw/preventing-and-responding-sexual-harassment
That was pretty much what I was hoping for. No blame shifting, no victim blaming, simple, gets the job done, offers help to anyone who needs it. I've cribbed this from John Scalzi's excellent guide to apologies, which lays out what a good apology should and shouldn't contain.

You might argue that this is all a bit of an overreaction to a simple photo. Do we all have to issue formal apologies for everything we do in life now? In this case, no, it really isn't over the top. Jeremy Buckingham is a Greens MP, a public representative, a group we would hope is held to higher standards of public conduct. He also represents the Greens, a party which stands for progressivism and human rights. I know for me, there's no "confected outrage"; I simply saw the photo, prior to most of the discussion on the matter, and felt disturbed and disappointed, and didn't really appreciate being told my visceral reaction was petty, prudish or over reacting.

In the case of Mr Buckingham, there ought to be an extra level  of sensitivity to these matters. The topics of sexual harassment and assault have been much discussed in recent times due to the #MeToo movement; in the case of the Greens, these discussions have been the more necessary and painful due to several incidents involving Greens members. High profile Greens member Jarah Crook, a former staffer of Jeremy Buckingham's, was accused of sexual assault by several young women, who allege the Greens failed to take proper action when alerted to the offences.

There was also the case of the ACT Greens volunteer allegedly assaulted by a senior Greens member, with Greens founder Bob Brown appearing in the media attacking the victim for her public anonymity and not going to police sooner. At a recent "meet the candidates" forum for the NSW State election, candidates were asked about Brown's comments in light of Greens harassment policies; all disavowed the comments except Mr Buckingham, who stated he was unaware of any such comments, which seems slightly disingenuous considering they were the talk of Greens' circles for weeks (I never know anything that's going on, but I was well aware of this). At any rate, I hope that Mr Buckingham took the opportunity to fully inform himself of what Bob Brown said and shared the view that it smacked of victim blaming.

So yes, I would expect Jeremy Buckingham to be more sensitive to matters surrounding sexual harassment and abuse; and to realise the hurt this photo caused and react appropriately.

Instead what we got was this:

“Attributable to Jeremy Buckingham: “This was a light-hearted up-yours and raspberry blown to the opposing trivia team after we won a trivia night. It was not intended to be anything else. I have apologised to anyone who has interpreted this gesture differently and any offense that it has caused.”
and

“I am a fan of 1970s punk rock and Rick Mayall from The Young Ones who often used the two finger up-yours as a cheeky gesture.”
and

“Hi Chris, Background (not for attribution) the photo was taken of the winning trivia team at a Greens trivia night. Jeremy is giving a light-hearted up-yours and blowing a raspberry at the opposing teams. It was not intended as any kind of sexual gesture. Perhaps it is the camera angle that makes it look like something it is not. It was posted by one of the other members of the trivia team to a private Facebook but then taken and publicised by former Shoebridge staffer Lauren Gillin.”
Said responses being provided by email to a journalist from New Matilda as outlined here. No ownership, no real apology - it's not I'm sorry for what I did but I'm sorry that you took offence. And all finished with an attempt to paint this as some sort of factional smear in an internal NSW Greens battle I'm not even going to start trying to explain here.

I was upset and disappointed by this photo, but I was willing to give Jeremy Buckingham the benefit of the doubt here, I really was. Instead, a learning opportunity and a chance to take the dialogue on sexual harassment in healthy directions regarding respect and a chance to link survivors with helpful resources  has turned into a disaster which does nothing to correct impressions that the Greens are a boys' club like any other party, that women can never feel entirely safe in politics, that concerns regarding harassment are not taken seriously or that as a Greens MP, Jeremy Buckingham understands the importance of his role in all of this. The photo was bad, but the obfuscation and cover up are so very much worse. And I'm feeling even sadder and more worn out than before.