Nico Bell 3.1.19
Those of us above a certain age may remember back in the heady days of the 1990s when, in between listening to The Offspring and dropping into the cabin to say hi to the pilots when boarding a commercial airline flight, all the talk was of "going postal".
The term was derived after a number of United States postal workers, pushed to the point of fury with their employers and turning to guns as so often happens in that nation, resorted to opening fire on their coworkers and customers. It was a series of very real tragedies that became a verbal meme of sorts in the pre internet days; then as the actual internet took over the world, it seemed the death of the physical letter would lead to the end of postal services themselves. The days of going postal were over.

But with the revival of the postal service in the wake of online shopping can we have a minute to talk about the rage experienced by those of us poor helpless customers of the post office? I've written previously about Australia Post taking longer to get a package from Sydney International Airport to my house than an actual snail. But even once they've bounced your package between two depots in the same city for two weeks before routing it through Darwin, they fail to get the hang of delivery.

I lived on the third floor of a security apartment block when the buzzer indicated the package I'd been messaged to expect had arrived. I buzzed from my flat to let the guy in downstairs, but nothing happened. He buzzed again to let me know he was there. I stuck my head out on the balcony and saw him downstairs at the front door of the apartment block. I yelled out that he just needed to try the door, but he just kept buzzing and shaking his head, evidently intending I come down 3 flights of stairs to get my package, which I couldn't do at that moment. We stood there for several moments like Romeo and Juliet in reverse, with me calling out from a balcony and him refusing to try to get to me. (Although after I saw him depart, taking my long awaited parcels back to the post office, I did find myself wishing he'd die shortly).

It's no use. When you've at long last worked out where your parcels have gotten to, you have to go to the post office, once you can find it, since most of the beautiful original post office buildings in Australia have been abandoned in favour of one ugly retail outlet every 3 suburbs. And you have to go - I tried to send a friend to pick up a heavy package for me, but despite him having the official Australia Post card to indicate there is a package waiting for me, with the official tracking number and barcode and all the rest, which I had signed to indicate he had my permission to pick it up for me, they wouldn't give it to him because although he could name my street, he couldn't remember my unit number.

And when I say retail outlet, I am not kidding. The modern Australia Post office looks like a TV Shopping Danoz Direct outlet filled with cranky customers and the most bizarre consumer crap no decent person could possibly want. 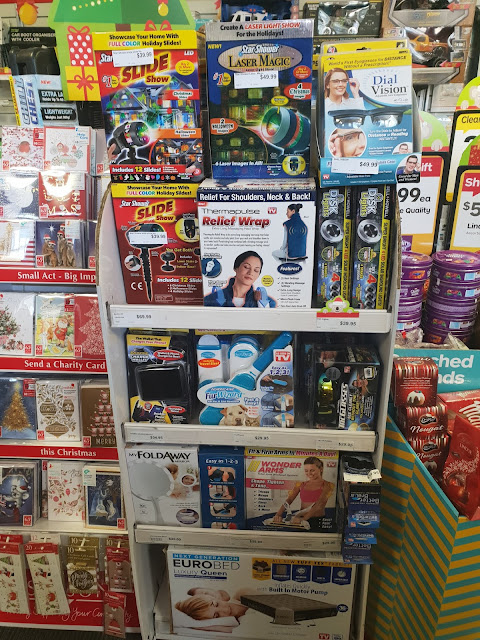 What even are Wonder Arms? I couldn't figure it out despite ample time to  consider the box whilst queuing; an exercise devise I suppose, although I did spot a product warning that said "Results may vary. Consult your doctor before beginning any new exercise routine. Any results from Wonder Arms are coincidental and for information purposes only. Product may cause palpitations, birth defects and arm weakness. Your boss knows you've been fiddling your expense account and you've passed the chlamydia you got from that secret Tinder hookup onto your wife. Product should not be taken internally...much like the Tinder hookup."

The same three people work at every Australia Post office, although there are only ever two of them on duty, unless it is very busy, in which case there is only one of them on duty. The all look tired, vaguely dusty and terribly disappointed. When you at last get to the front of the very long queue, they take your ID, stare at it at length as if it holds the answer to escaping the existence they find such an apparent torment, then disappear for an unreasonable length of time into the sorting room. Have they learned nothing about computerised organisation from Amazon? Otherwise what is going on back there whilst they spend 18 minutes in a suburban post office searching for your parcels? I'd suspect they're all having really wild sex, except no one who's having that much sex could look that wearily done with the world. You certainly wouldn't want your Redbubble delivery back if it was handed to you slightly sticky, but it too seems weary and dusty from its encounter with the post office by the time it is signed over to you.

But even then, you are lucky. I finally made it, sweaty before work on another 35ºC Sydney day, to the post office to pick up a package that mysteriously couldn't be delivered despite my working from home that day, to be met with this: 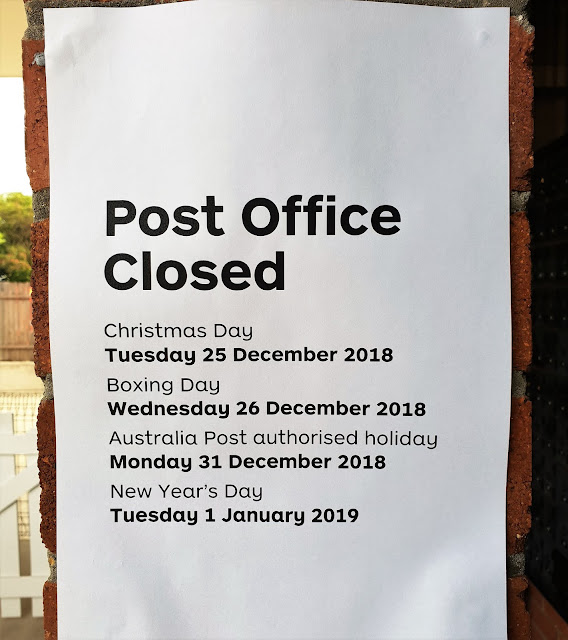 I'm on too much medication to be brought to the trembling fury this would once have inspired, but what the hell was an Australia Post authorised holiday? A picnic day of all things, apparently? Who goes on a picnic on New Year's Eve? No one, in Sydney, unless you like being crushed into a shadeless confine without benefit of alcohol for ten hours, then rained on, seeing ten minutes of fireworks, then waiting four hours for the train home. Precisely the sort of disappointing night that makes postal workers look so defeated. They no longer need to go postal themselves, though. They inflict more than enough pain and suffering on the rest of us. I hope they choke on their canapes, no doubt made using one of the plastic gimmicks they sell in store.