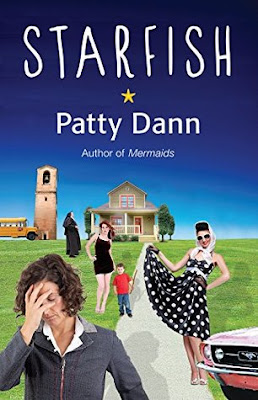 The film Mermaids meant a lot to me in my early teens, as I guess it did to a lot of women of my generation. Teenage films were pretty much dead as a genre between the John Hughes/Molly Ringwald era of the 1980s and the release of Clueless in 1995. The success of Clueless lead to an explosion in the release of teen movies, from sexploitation (American Pie) to horror (Scream, I Know What You Did Last Summer) then cheerleaders (Bring It On) and mean girls (one mean girl in Cruel Intentions, then a whole eponymous film of them). By the time Clueless was released, I was way too depressed for anything that looked as blithe as the poster suggested - though I did watch, and love, the film several years later, then many times since.

But in the early 1990s, it was slim pickings. Mermaids was it. Not that Mermaids, a coming of age story set in a small Massachusetts* town in 1963, is expressly a teen movie; the wonderful performances of Cher and Bob Hoskins make it so much more. But it was a film whose central character was a girl who wasn't blonde or perky or popular, in a delightful turn by Winona Ryder; a girl who read books and had unusual interests and never went to the mall. I loved it, and was too young to grasp the problematic nature of the central plot point - a 15 year old girl who falls in love with a 28 year old man...a man who returns her affections. Yeesh. I loved it enough to hunt down at the library and read the book it was based upon, Mermaids by Patty Dann, which I remember not liking quite as well as the film. Though I've seen the movie several times, I never read the book again.

By accident, I found out that Ms Dann has written a sequel to Mermaids, Starfish. And although I was wary, remembering that even as an unsophisticated 13 year old I'd been unimpressed by the original tome - and for perspective, in those days I loved reading V.C. Andrews - I decided I did rather want to know became of Charlotte, Kate, Lou and Mrs Flax.

I was sorry that I bothered. In a word, this was disappointing. In another word... I don't want to be that cruel. I gave the book two stars only because of my echoing fondness of the film Mermaids.

It's now 1991, Charlotte is all grown up at 42 and has returned to Grove to live in her old house and throw a birthday party for her mother, the incomparable Mrs. Flax, whose greater presence would have livened up this novel considerably. Alas, we are stuck with just Charlotte, who has random sex with an (adult) student from her English class she's barely spoken with, which at least gives her a change from her usual routine of constantly driving to outlet malls and wandering around the grounds of the former convent that played such a big role in the first novel, hallucinating that she can still see the nuns. (So much for not going to the mall). Charlotte does finally hear from her long lost father via an aerogramme, and invites him to Mrs Flax's birthday party, seemingly uncaring as to whether her mother would appreciate her party being crashed by her first boyfriend who she hasn't seen in 43 years. This is all about Charlotte. Her solipsism makes you dislike her so much you want things to turn out badly for her (was she this insufferable in the first book? I can't remember). She reminds me of my son when he was 3 and would shout "only I have feelings!". Only Charlotte's feelings count, and Charlotte's feelings must be acted on by Charlotte, immediately.

We are soon joined by Kate, Charlotte's younger sister, who turns up to stay with her 3 year old son (who seems to exhibit signs of global development delay that Charlotte, as a teacher, should recognise but doesn't). Charlotte remembers examples of Kate's wild behaviour, sneaking out at night to see boys, but given the age gap between the sisters and that Charlotte was attending college by 18, Kate's offending behaviour would have started when she was ten.

And you thought Charlotte having sex at 14 with a 30 year old man was bad.

Kate now is still supposed to be "wild". But the worst she seems to do is sleep with men she doesn't know very well - no worse than Charlotte does herself. There's no substance abuse, unless you count Kate's habit of being seized by the uncontrollable desire to go and...work as a nurse in a local emergency room, which she does multiple times in the book. First, don't you need a licence or something to work as a nurse in a different state? Does Kate just show up at the ER saying "please help me! I GOTTA take a temperature and blood pressure. Come on man, I'm dying here"?

Anyway the party happens and oh of course look who it is, Joe Peretti, who Charlotte rudely snubs at the party but later shows up at her house to make amends. Charlotte began a campaign to stop her house being taken by developers and I was looking forward to her taking on the big guys, but that fizzles out. Kate takes off for ERs in pastures anew and leaves Irving behind; Charlotte then again leaves a child unsupervised so she can have spontaneous sex with Joe Peretti, which is exactly what causes her sister's near-death experience in the first book but doesn't stop Charlotte from being so overcome with lust that she leaves her nephew wandering around outside alone so she can sin with Joe on the floor.

Charlotte's dad finally shows up, and leaves again promptly after an awkward and disinterested visit - the guy who blew off a shotgun marriage at 16 having become a genealogy obsessed English professor. Oh, and Mrs Flax and Lou hook up again after 27 years apart. Will they finally get married after all this time? Who knows, but basically everything is tied up in a neat little package with a bow I sometimes wanted to wrap around Charlotte's neck.

I guess the second star is also due to the fact that Starfish is set the same time period as the film Mermaids came out. I like that kind of wink at the audience. There wasn't much else to like in this clumsy, awkward book with its clichéd situations, stilted prose, and insufferable protagonist. If they ever make a film of this turgid mess, I'll be rushing to get tickets to anything else.

Follow me on Good Reads for more reviews. (Although my reviews, like my posts here, tend to be rather sporadic).

* I spelt Massachusetts right on the fourth try!