This post was originally published in 2015. In light of new developments in the case, I'm republishing this edited and updated version now. 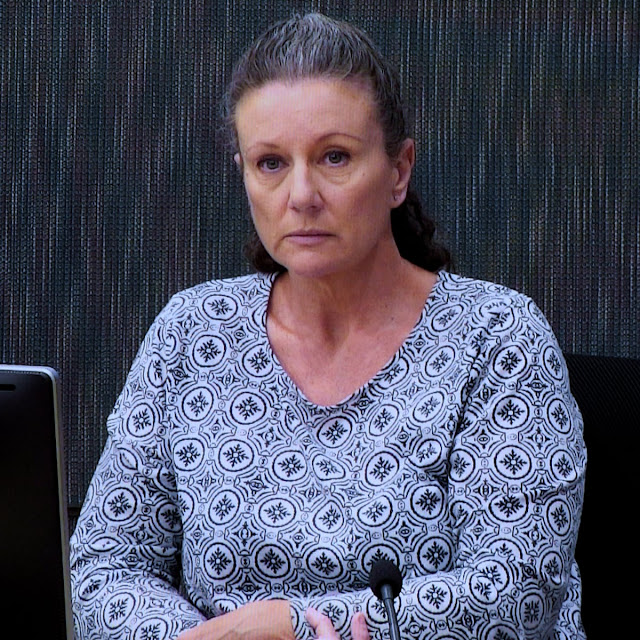 What could be more devastating to consider, more disturbing to the fundamental principles of humanity - and more likely to incite public anger - than the idea of a mother who kills her children?

There are some events which are so horrific that people, unable to make sense of what has occured, lose sense all together, and lash out in strange and damaging directions. In the case of the Sandy Hook massacre, the deaths of 20 small children were so devastating that some people couldn't comprehend that those children existed at all, and started lashing out at the grieving families, accusing them of being actors milking public sympathy. When terrible crimes occur, you'll frequently see comments on social media that the accused doesn't deserve a trial - upending the fundamental principle of the justice system that everyone gets a trial. A global pandemic hits, and people decide it must be a hoax, that millions of people aren't actually dying.

And when four infants from one family die of seemingly unknown causes, people are so disturbed by the notion, they rush to assume that it couldn't have been a natural occurrence - that someone must have killed those children deliberately. These bottlenecks of furor occur when terrible events strike the public conciousness too intensely and quickly for people to process, so they rush to blame, to scapegoat, to do anything they can to assure themselves there's a reason for all this and it can't happen to them.

So when four baby siblings from one family die, the public needs a monster to blame. And who could be more of a monster, more the epitome of everything we fear and despise, than the accused monster Kathleen Folbigg?

But finally now science can point to what her supporters have said all along - that Folbigg was convicted simply for being that monster, the scapegoat for the furious bottleneck of public rage, rather than what the law can prove that she actually did.

Folbigg achieved notoriety in 2003 when she was convicted for the deaths of her four children – Caleb, Patrick, Sarah and Laura – over a ten year period. She was convicted of manslaughter over the death of her first child, Caleb, and murder of the subsequent three children.

The deaths of the earlier children aroused no suspicion and were attributed to Sudden Infant Death Syndrome (SIDS). SIDS is a diagnosis often made in the absence of evidence of cause of death, when an infant dies unexpectedly in their sleep. It was the death of the fourth child, Laura, which drew Folbigg to the attention of authorities; at 19 months old, she was well past the traditional danger age for SIDS, and had been by all accounts a healthy child. There was much debate as to whether multiple SIDS deaths in one family were statistically improbable, or whether there was a familial risk where one death made subsequent deaths more likely.

But there was no forensic evidence showing the children had been deliberately killed.

With the lack of forensic evidence, a key tool in the conviction of Mrs Folbigg was her personal diaries. The diaries, given by Mrs Folbigg’s husband Craig to police after she left the family home following the death of her fourth child Laura and presented as evidence at trial, appeared to show her admitting guilt for the deaths of her children. The defence argued the diaries showed only her feelings of grief and guilt at the deaths of her children:

With Sarah, all I wanted was her to shut up. And one day she did.

Scared she’ll leave me now. Like Sarah did. I was short tempered and cruel sometimes and she left. With a bit of help.

There is no direct admission in the diaries, however, that Folbigg took any direct action that led to the deaths of her children.

But Folbigg was also on trial as a mother. She didn't cry enough. She wasn't warm. She was said to prefer going to the gym and nightclubs to being with her children. From there it was surely just a short step to murdering them, apparently.

In this, she was compared to Lindy Chamberlain, who was also portrayed as hard and uncaring, not sufficiently emotional following the death of her daughter Azaria. Chamberlain was also othered, cast aside from the mould of accepted motherhood, due to her perceived-as-strange religion of Seventh Day Adventism, for dressing the child in black, and rumours that Azaria’s name meant “sacrifice in the wilderness” – that far from being the doting mother, Chamberlain birthed her daughter to complete some ritualistic killing in the Australian outback.

We now know Lindy Chamberlain was not responsible for the death of her daughter.

Meanwhile, much was made of Folbigg's troubled background, with her father murdering her mother when Folbigg was a toddler, and from that time lived in a succession of foster homes and had difficulty forming attachments - as if a person's parenting skills can be forseen from their behaviour as a child growing up in unfamiliar homes.

Lacking forensic evidence, the prosecutions case relied on the opinion of doctors - who argued that the odds of four children in one family dying of SIDS were so statistically unlikely as to be impossible.

We also now know that SIDS seems to run in families - meaning the death of one child from SIDS makes the deaths of subsequent children more likely.

When I first posted about Folbigg's case in 2015, there were calls for her conviction to be reviewed on the basis that the original conviction relied entirely on circumstantial evidence. An inquiry was held in 2019, conducted by the Honorable Reginald Blanch, AM QC, a former chief judge of the District Court. The 2019 inquiry upheld the original conviction, with Mr Blanch finding he did not have any reasonable doubt as to Folbigg's guilt of the offences she was originally convicted of, and that the inquiry merely reinforced her guilt. Blanch stated:

It remains that the only conclusion reasonably open is that somebody intentionally caused harm to the children, and smothering was the obvious method. The evidence pointed to no person other than Ms Folbigg.

The problem with all this is that the 2019 inquiry was essentially a review of the original trial, not a consideration of scientific evidence. Blanch came to the conclusion that if four children from one family had died, the "only reasonable conclusion" was that someone had killed them. Four unexplained deaths in one family is too much of a coincidence, right?

Which is too ignore the fact that if any of the children had a genetic factor that contributed to their deaths, the very fact that they are related makes it more likely that other children in the same family had the same genetic mutation.

This should have been considered at the original trial. Even if a exact genetic mutation that killed the children couldn't be pinpointed, the odds that all of them died suddenly and without explanation was not at "astronomical odds" against occurring; it was more likely than not that whatever kink in the genetic cascade that makes us, us, and tragically killed one child would be inherited by that child's siblings as well. That wasn't some huge mystery back in 2003, when Folbigg was originally tried. And hey, things happen to minds and bodies that we can't explain all the time. I have chronic fatigue syndrome, a disease that no one knows what causes it or how to cure it; heck I'm left handed, and no one knows why that is, either. So we don't know. And whilst it may have been supposition to raise the possiblity of a genetic flaw that caused the deaths of the Folbigg children, it's no worse than the supposition that their mother smothered them all, not held against the standard of proof beyond a reasonable doubt.

This month, we finally saw proof of that genetic flaw presented to support Folbigg's release. 90 respected scientists and medical experts - including two Nobel laureates, two Australians of the Year, a former chief scientist, and the president of the Australian Academy of Science - signed a letter to the NSW Governor requesting Folbigg's immediate pardon and release. Carola Vinuesa, a professor of immunology and genomic medicine at the Australian National University, and her team found a new variant in the CALM2 gene, which Kathleen Folbigg acquired and passed on to her daughters. The findings were published in the journal of the European Society of Cardiology, Europace; Professor Vinuesa and her team found the variants in the CALM2 found in Folbigg and her daughters can cause sudden cardiac death.

Whilst the Folbigg mutation in CALM2 was a novel discovery, it was noted that it was as severe as other CALM variants, which are known to cause cardiac arrest and sudden death in children - especially if those children are suffering from infections, as Sarah and Laura Folbigg were at the time of their deaths.

What is more, the Folbigg boys, Caleb and Patrick, also had a genetic mutation, a rare variant in BSN linked to fatal early onsets of epilepsy, with more research required.

This case is terrifying. On a societal level, it's terrifying that the judicial system can get it so wrong. If Ms Folbigg's conviction is overturned, there could never be compensation enough for taking away 20 years of a person's life, locking a grieving woman in jail for something she didn't so - something that never happened, the murder of four kids who died of natural causes - and turning her into the evil woman, the object of all our nightmares, the woman whose intense personal grief was subsumed to assuage the community howl of pain.

On a personal level it scares me as well. Because if my emotional reaction to parenting was ever put on public trial, you might as well lock me up beforehand to save time. I'm not someone who shows much emotion in front of others. When something terrible happens, I tend to shut down, have a delayed reaction, howl in private. And when I can't howl anymore, when the tears dry up and the blood vessles in my face have burst from so much crying, I will do anything to take my mind off it. A look at my social media might paint a picture that I'm doing just fine without my child living with me. I have a career, I take solo holidays, I go to shows and art galleries and restaurants, how sad could I be?

Very, very sad. But I try to keep it inside, put it away, because what can I do? And so when I read of Kathleen Folbigg going to nightclubs and the gym after the death of her children, I can imagine how it was the desperate attempts of a woman who is trying to deal with the worst thing that can ever happen to a person, as if it can be dealt with. And then she was jailed, in a prison full of women who view the child killer they assumed her to be as the worst scum of the Earth.

I'm not sure what more could be needed to, at the very least, release Ms Folbigg whilst the case is reviewed on the weight of science, not circumstantial evidence. There's no longer supposition about a possible genetic mutation causing the deaths of the Folbigg children; they've found the gene variations. Gene variations that cause sudden death in children.

I ended my original post by saying that the media and judiciary made Kathleen Folbigg a monster for what they assumed she had done, but she should not be in jail for that. I feel more strongly now, that she must be released immediately. And after that, well, someone needs to account for all the damage done.