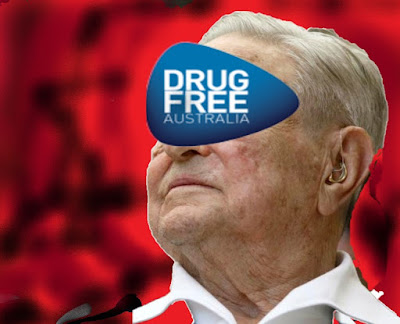 Drug Free Australia sound like a stand up bunch of people on the face of it. Keeping kids from trying drugs is a noble aim, I think we could all agree, even if in one's most exhausted, stressed out moments of parenthood the desire to sedate your kids has briefly flashed across your mind.

But for the peak body Drug Free Australia, that may be the only noble thing about them. Problematic doesn't even begin to describe this lot. They peddle pseudo scientific nonsense about the dangers of drugs, partner with organisations that have been labelled brutal, unscientific and based on human exploitation and have stated that gay people should be laughed at and ridiculed*. Most disturbing of all however is that DFA heavily leans into the Anti-Semitic conspiracy theory that George Soros covertly runs the world.

Yikes, who are these people? You don't have to go far beyond the face of it to see that these people aren't on the level. The front page of the DFA website claims the Uvalde shooter's deadly rampage was a result of his marijuana use, on the most tenuous of evidence. Look around a bit more, and one comes to the disturbing conclusion that DFA is a front group for as much homophobic, bigoted and Anti-Semitic rubbish as they can throw out in the hope it sticks.

The patron is Margaret Court (styled on their website as Dr Margaret Court, despite the fact that she is the recipient of an honorary degree only). Ms Court runs Victory Life Centre in Perth, a Pentecostal Church which received hundreds of thousands of dollars in annual funding under the government of her Brother in Prosperity Gospel Christ, Scott Morrison, along with $500,000 of JobKeeper funds. She's been a supporter of apartheid, said it was sad to see Martina Navratilova as a champion player on account of her lesbianism, and freely spouts her bigoted views on LGBTQ people as a pretext to paint herself as victim and solicit donations.

None of their committee members have any qualifications in drug research, medical science or public health, which goes someway to explain why their research director Gary Christian, in a submission to the Victorian parliament, claimed cannabis can cause autism and makes users "kill the people closest to them".

Their resource library features just three articles about ecstasy and two on fentanyl. But listed under the subject heading is SOROS - with links to forty two sites and articles from news websites both legitimate and dodgy. What has George Soros got to do with drug use? Everything, according to DFA. Soros encourages legalisation of sex work to create markets for drugs, is funding efforts to decriminalise cannabis in Australia, is a drug lord Nazi collaborator who created the decriminalisation lobby, controls an international network of progressive media, is an arch demon oligarch with Marxist evil passion destroying Australian families to turn children to drugs, and for good measure wants to flood Europe with asylum seekers, paid for with other people's money (for a change). It's all there, listed under the Drug Education Library on Drug Free Australia's website, and without any disclaimer that the views expressed in the articles may not reflect the views of DFA itself.

Whilst George Soros has been accused of controlling and funding every left wing movement on Earth for decades, the rhetoric has hit fever pitch recently. Soros is a particular target for the hatred of QAnon, funding and protecting child sex abusers; he's also behind Antifa, Black Lives Matter, fraudulent voting and probably also for taking the decorations off of Starbucks Christmas Cups, according to the brains trust of the far right.

And no mistake, the George Soros conspiracy theories are Anti-Semitic. A secretive cabal of Jewish international financiers running the world is an Anti-Semitic trope going back to the Middle Ages; the lie has been updated to concentrate the power of the cabal in the hands of just one man, giving the far right plausible deniability to insist that they are not anti-Semitic - they have Jewish friends! But many of them are no longer even trying to deny it:

Soros’s critics barely hide their anti-Semitism anymore, frequently posting images of him with grossly distorted anti-Semitic features. The attacks also frequently reference, directly and indirectly, longstanding anti-Semitic theories from texts such as the Elders of Zion that claim Jews are running an international cabal.

What is most troubling perhaps about the attacks on Soros is that they also reflect a growing wave of anti-Semitism in America and around the world. The Anti-Defamation League has called Soros conspiracy theories “a gateway to anti-Semitism” and noted the explosion of anti-Soros sentiment in the a wake of the George Floyd protests. The report also detailed a litany of anti-Soros pundits and provocateurs who traffic in false claims and inflammatory rhetoric. By giving oxygen to anti-Soros theories, these pundits not only do a disservice to the truth, but they fuel anti-Semitic hate and violence.

Parents looking for information about drugs find DFA through a Google search and end up down a George Soros rabbit hole. We've seen, again and again, the dangers of online radicalisation. We need to be aware of this and call it out. DFA would probably agree with me that the best prevention is education. So we need to understand what Drug Free Australia is all about. Don't give them a platform in the media. If your kid's school is running a drug education program, check where the resources come from. Any pamphlets or information from Drug Free Australia, let the school administrators know what DFA really stands for and that they're not a suitable organisation to partner with schools. (DFA is currently flogging a program for schools called "Save Your Brain"; keep an eye out for that one as well).
I could probe further into the disturbing, and dangerous, mistruths DFA tells about drugs themselves, but it should be obvious they have no credibility on anything. Trying to cancel Drug Free Australia? You bet you are, you bet I am.

* And for no apparent reason, a American real estate coroporate group featuring entities such as Conservative Move and Escape Blue State.