When you have a chronic illness - especially an illness like Chronic Fatigue Sydnrome that can't be diagnosed through testing (though we're constantly hearing doctors are on the verge of a breakthrough), or treated - lay people are continually coming up with alternative remedies. Try rubbing lavender oil on your pulse points. My neighbour had this, and they started going for a walk each day at sunrise, and they felt much better. Bury the third finger of the left hand of an Amazon delivery driver under a full moon, and it will re-align your chakras for long term relief. 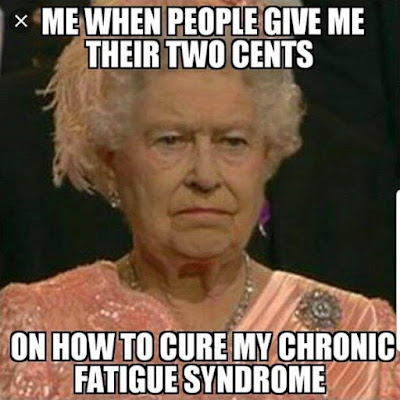 I'm a member of fairly active CFS/ME online groups (well, it gives us a chance to be active). Between several thousand members, I've seen every natural remedy and cure suggested, and for pretty much every one, it's worked for some people and not for others. Yet people are often desperate to try anything, especially because the symptoms of CFS/ME are so awful - and especially for an illness so misunderstood by the medical profession. I've been referred to the main fatigue specialist at a leading Sydney teaching hospital; a quick Google search shows the guy still pushes the largely discredited exercise therapy as treatment for CFS. No thanks. 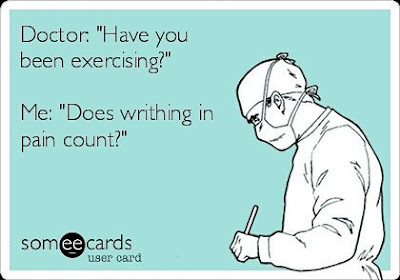 I'm normally cynical that any particular diet, botanical supplement or essential oil will work for me. Crystals? Crystals I love! They look pretty on a shelf or desk; I have quite a collection. But I don't expect them to do anything, other than need dusting. But after a Facebook post where I had a little whinge, several people also struggled with chronic illness suggested I try zinc and fish oil. I was sceptical, but zinc and fish oil seemed like they might have some physiological effect, and what did I have to lose, maybe $30. What I had to gain was everything, since CFS was leaving me barely able to half-arse my part time job, then spend the weekend in a dizzy, nauseated fog as the house fell to bits around me.

So I bought the stuff at the pharmacy, and added the pills to my already substantial daily tally. And you know what? I did feel much better. Much better. Not straight away, but within a few days. And by a month or so in, I was able to take Mr 10 to a water park (where we had a much, much better time than last time); help run in person events for work including setting up furniture and running around getting items forgotten; and slam out a 3000 word uni assignment 4 days early so I could take a 4 day trip to Melbourne, where although I did have some achiness, that was largely attributable to packing the wrong shoes, I still managed to average 12,000 steps a day and see pretty much everything I wanted.

All in rapid succession, and all unthinkable a few months ago. I should have trusted the souls of the dead fish, right? But I didn't, I ran out of the stuff and forgot to replace them. Hello, my symptoms have returned. The alternating sweats and chills, nausea, dizzyness, needing to rest after a taking a shower, getting eight hours sleep and still stumbling into a three hour nap and waking to sleep paralysis. Okay, I am convinced. That's what I get for trying to live in a world without zinc.

No more! I will be permanently stocked up from now on.
~~~~~
In the unlikely event that you get your news from a blog that hasn't been updated for months, the Federal Election has been called for May 21. I'm not going to offer any insightful takes at this stage. Unlike, say, the exciting prospect of removing John Howard that was so joyfully fulfilled, this time I'm just numb. Not specifically because of Labor losing the unloseable election of 2019*, it's more that I'm a few years older than I was in 2007, and we've all been through some stuff, and basically my brain has trained itself to constantly expect the worst.
But I see a lot of people on Twitter in denial. Morrison is gone, they confidently proclaim. I get the need for a happy ending after we as a nation have been through fire, pandemic, lockdowns, separation from loved ones and endless floods. But I think people need to be realistic. Hope for the best but expect the worst. If your brain is programmed to Morrison can't possibly win and then he does, the devastation will be real. Trust me, I've been there, I thought Howard couldn't possibly win in 2004 and then he did and I was in a bad mindset over it for weeks. Sure my mindset was generally bad back then, but everyone's mindset is bad now. So...brace yourself.
I'm not saying give up. We all have a lot of work to do. If you know anyone in your life who's not determinately conservative, but wavering on who to vote for, familiarise yourself with the Morrison government's record and each of the major party's platforms, then have a chat with them about the issues. They may believe untruths they've heard in the media, and you can let them know the facts. Don't be dogmatic, just have a chat about their concerns and where parties stand on those concerns. You may win over an undecided voter.
But, you know, hope (and work) for the best...but prepare yourself for the worst. Lord knows, Labor have stuffed it up from here before.
* I'm not a Labor supporter - I will continue to vote Greens and volunteer for them on election day if my zinc and fish oil regime holds up - but they are still generally better, though not great, on many of the issues I care about, and bonus points for not having to see Scromo's creepy, smarmy, smirking face.