Nico Bell 22.9.09
I'm getting married because I'm needy, insecure, and have abandonment issues. There, I said it.

This article in the SMH created quite a bit of controversy. The writer, Catherine Deveny, labels weddings and marriage as antiquated, conservative traditions, "the reinforcement of unrealistic expectations, outdated gender stereotypes and proof we're still being sucked in to happily-ever-after endings. It's also a scathing indictment of our lack of cultural maturity and spiritual imagination. And proof we're emotionally medieval." Well, okay. Marriage is Ms Deveny's bugbear, I understand. I've got mine - circumcision and people who drive cars, and I'll happily see everyone who practices either slowly put to death. Marriage though? Well it doesn't really hurt anyone, as long as two parties go into it equally and willingly. I used to hold similar views to Ms Deveny, and in a way still do. I'm not going to use my personal situation to prove her wrong - a particularly right-wing arguing technique that, for example, turns every parent into an expert on the behaviour of paedophiles.

So I don't have a bugbear about marriage, but I do have one for weddings. "Every bride" spends months dreaming of, and planning, her big day. She plans all the little touches that will make it reflect her and her husband. So why does every bridal couple these days look like they've been churned out of a factory? 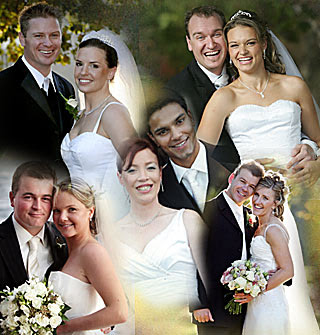 These are actual wedding photos of real couples, printed in Australian newspapers in 2009